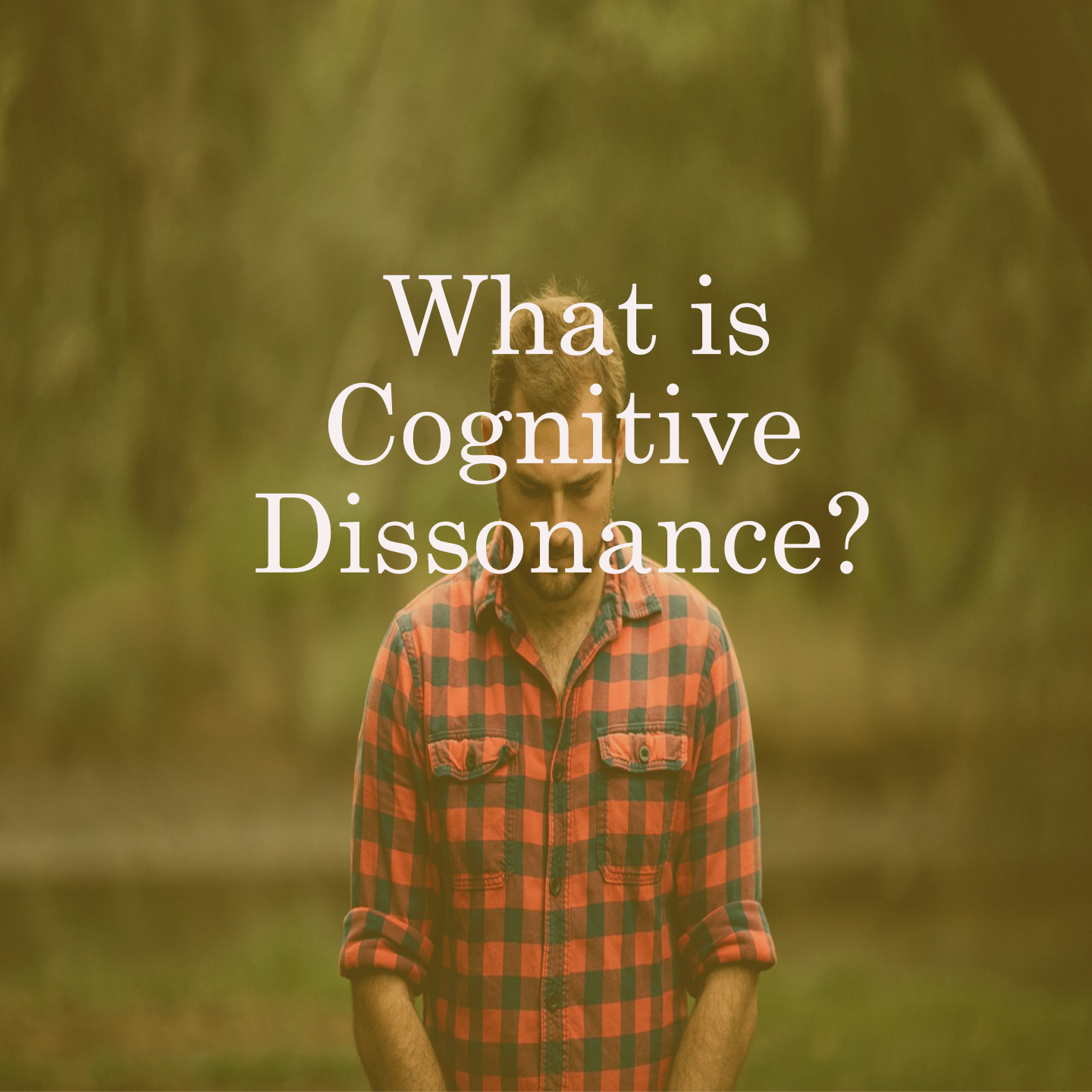 What is Cognitive Dissonance and how can you 'Fix' it?

We all experience cognitive dissonance regularly in our daily lives and it shows up when we have to make decisions that are important, but we’re not sure which decision will be best for us. Should we talk a great new job offer in another country, or should we stay put in our comfort zone? On one hand, we might be tempted to stay put, but wow, the thought of a new job in a new country is exciting. But it also brings fear, so you experience a bit of cognitive dissonance because you’re just not sure which option is the best one. Another good example is ‘buyer’s remorse’, which most of us have experienced at some point. At the time, we bought this lovely new thing, and it was maybe a lot more than we could afford. Then later when we get home, we experience feelings of regret, doubt, shame even, that we’ve bought it when we couldn’t afford it. This creates ‘dissonance’ in our minds. Cognitive dissonance in narcissistic abuse is however, much more dangerous and damaging.

Cognitive dissonance is a term coined by American Social Psychologist Leon Festinger, way back in 1957. The theory is that we have this inner drive to hold all our attitudes and behaviour in harmony to avoid disharmony, or dissonance. When something gets in the way of that, we get cognitive inconsistency.

So, what happens in a narcissistic relationship is that the narcissist is behaving one way in the beginning, and it’s all wonderful, and then suddenly their behaviour changes and they become cruel and hurtful, and you don’t understand what is going on. There are two things going on in your mind now that don’t make sense, two conflicting realities that you’ve experienced with this same person.

I’ve experienced cognitive dissonance once in my life, so I know how very confusing and unsettling it really is. I was in my early 30s and had gone to Ireland to celebrate my uncle’s 60th birthday with our very big family. We were all sharing rooms with 3 or 4 beds and assorted family members would end up sleeping wherever they ended up. There were 3 beds in the room I was in, and one morning after a very late, boozy night, I woke up late with a raging hangover. Both the other beds had been slept in but were empty, and I realized it was gone 10 o’clock. Then one of my sisters came into the room and she looked a bit worried. She sat down on my bed and she said ‘I have something I need to tell you…’ Concerned, of course I sat up and said ‘What’s going on?’ So she said ‘Barb’… that’s not my aunt’s real name, but she was referring to one of my aunts who it turned out, had slept in one of the beds in my room…‘Is missing 400 pounds from her purse and she thinks you took it.’

I remember feeling as if I’d been hit with a hammer! I don’t think I could even speak for a few minutes.  I searched my head to try to make some sense of it… I had known and loved this aunt all my life… she was my mother’s sister and both our families had been very close growing up as they both had 7 children, all similar ages, so this wasn’t some aunt I only saw from time to time. We were always in each other’s lives, every week for as long as I’d lived at home. I didn’t know what to do, say, or think. My family (and hers for that matter), were outraged that she could make such an accusation. I had NEVER been known to steal anything, except for a ring when I was 6 years old… and as I sat in the pub later that day with my father and brother – a different pub from where the rest of the family were with my aunt, who I just couldn’t face, I remember feeling as if someone had died… the feeling of disbelief and shock was that intense… I just could not reconcile the aunt who I’d always loved and defended when other people made fun of her (because she often did or said really stupid things), and who I believed always had one good trait, and that was her judge of character, could possibly think that I would go into her purse in the middle of the night and steal 400 pounds off her. It was just incomprehensible to me and cast a huge black cloud over the rest of the holiday.

But this was cognitive dissonance that I was feeling… that complete inability to reconcile two totally conflicting things in a way that made any sense to me. I spoke to her once that day, to tell her how shocked, upset and disappointed I was that she could ever think such a thing of me, and then, I didn’t speak to her again until more than 10 years later, on the day of my mother’s funeral.

So I can imagine how much more deeply it can hurt when you are in a romantic relationship and the person you love, and who you thought loved you, starts gaslighting and devaluing you and cognitive dissonance kicks in. Cognitive dissonance tends to happen over time, when you are subjected to repeated inconsistencies from your abuser. On the one hand you love this person, you think you can trust them, so they can’t possibly be doing this just for the hell of it, can they? Oh but they can. Sadly, constant gaslighting and blatant lies are a narcissist’s stock-in-trade, and they think nothing of twisting things to suit their mood of the moment.

One of the ways that people typically try to resolve dissonance is to change their beliefs to something that ‘fits’ better with their belief system, and therefore they remove the dissonance. When it comes to a narcissist, the victim will very often blame themselves, and conclude that it must be their fault – they must have gotten it wrong. Here’s an example: The narcissist cheats on a partner, and the partner finds out. He/she confronts the narcissist, who denies it outright. But, the partner has irrefutable proof. So, the narcissist knows that he/she has been caught red-handed, and there is no point in denying it. So they then turn it around and say:

‘Well, it was YOUR fault. You made me do it. If you were a better (wife/husband/whatever), I wouldn’t have had to do it. You’re the one who’s really at fault here. Look what you’ve made me do! How do you think I feel about this?’

Now to your average person, this sounds absurd, but because the narcissist has stripped away so much of your self-esteem, you actually fall for this line of defence and believe that maybe it IS your fault. The cognitive dissonance happens when they you are one minute in a stage of being angry, upset and hurt because you’ve been cheated on – and in the next, you are being told it’s your fault. The two things don’t match up and in an effort to settle the dissonance into some kind of harmony – you shift your belief to thinking to believing what they want you to, regardless of your own feelings.

That makes you feel temporarily better, but it also means that you have unwittingly let the narcissist get away with the treatment and paved the way to allow more of this abuse to happen you. And it will.

But why is cognitive dissonance so damaging?

Because it causes stress, anxiety and discomfort. It forces us to try to make the behaviours fit the beliefs we hold true, and as in the case of the above example, to accept degrading behaviour and lies. In the case of ongoing gaslighting from a narcissistic partner, more and more confusion is heaped on you so you rarely feel emotionally stable and certain of what’s going on in the relationship. Most of the time, you just feel conflicted, confused and your thinking gets foggy. This makes it difficult to focus, to concentrate on work or other things you enjoy doing. Over time, you can find it difficult to make even simple decisions. Gaslighting is a primary cause of cognitive dissonance, and it is a corrosive form of abuse.

Brain scans have also found differences in brain activity during cognitive dissonance. Decisions associated with higher levels of cognitive dissonance showed a visible electrophysiological signal in the prefrontal cortex of the brain, the area responsible for monitoring internal conflicts and mistakes. As I have mentioned in other posts, narcissistic abuse has a real physiological effect on your mental and physical health.

So what can you do when it happens to you?

Unfortunately, the standard recommendations for dealing with cognitive dissonance tend to focus on you changing your beliefs, adding new beliefs, or reducing the importance of the beliefs you hold, and they are not very effective at all in dealing with a narcissist, for the reasons I’ve stated above – doing these things allows further compliance with the narcissist and they just keep on twisting and turning things, so that you don’t know which end is up anymore.  Also, when you are going through the emotional turmoil of a narcissistic relationship, cognitive dissonance creates powerful feelings in you, and by the time it happens, you’re already in that feeling, reeling from the shock and there’s nothing you can do to turn back the clock and change that. It also leads to foggy thinking and confusion at the time.

What I recommend if you are still in such a relationship, is to ground yourself in reality and the truth that you know to be true. Write things down. Record things if you can do so without further hassle. These things will help you to know that you didn’t imagine things, you didn’t get it wrong, you didn’t make it up, you’re not going crazy, and your abuser is lying to you and trying to scramble your reality. Don’t let them. And don’t argue the point if issues come up. Just say ‘Ok. If you say so.’. Don’t try to defend your knowledge of the truth; just know that your version is the right one, and keep that to yourself.

Once you realize what cognitive dissonance is and how to recognise when it happens to you, you’ll be in a much better position to not let it derail you, because the narcissist’s pattern will usually become clear to you. They’ll bounce around between gaslighting, devaluing, love-bombing, discarding, and hoovering as they continue to play havoc with your emotions. This is when you need to always remember to keep grounded and know that what your reality is.

If you’re looking back on an abusive relationship, you may start to recognise the times when you were experiencing it, and you’ll be able to reframe how you felt at that time and see things much more clearly. You can understand what it was, and why it happened. And understand that it was not your fault, you didn’t cause it to happen, there was nothing you could have done to prevent it, or done differently to make it not happen. Accept that and move on.

And as I always advise, learn as much as you can about NPD, reach out for support, and get the hell out of the relationship if you are still in one, because your sanity depends on it.

If you are struggling with narcissistic abuse and need help to heal, click here to book an appointment with me.