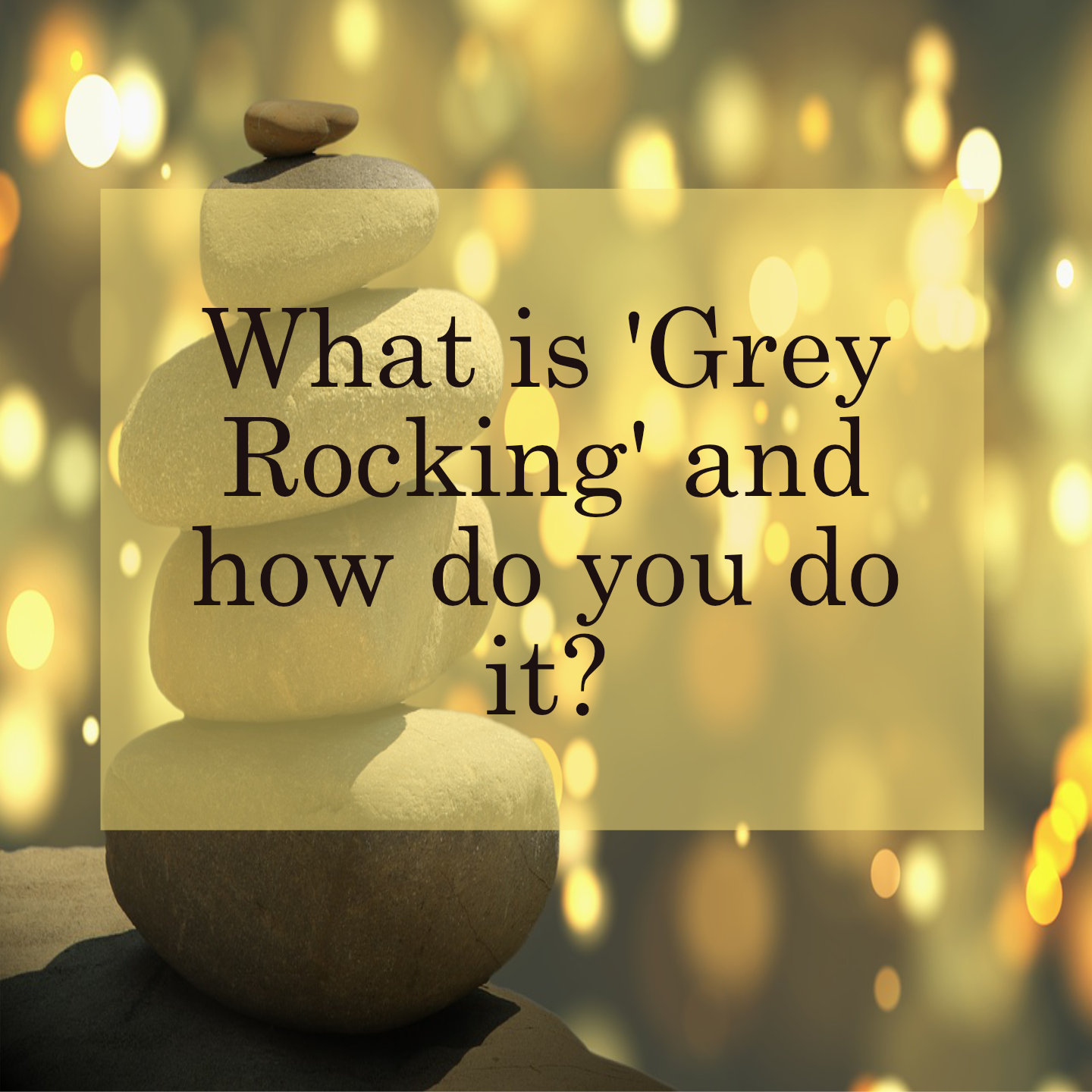 4 Quick-Fire tips to master 'Grey Rocking' like a Pro!

Understanding the term Grey Rock, and what it means, is particularly useful if you’re in a Narcissistic Relationship and you simply can’t get out – typically the reasons you can’t have to do with finance or children, or when you’re planning your escape strategy but you know it’s going to take time or you’re at the sage where you’re thinking of finding that way out, knowing what Grey Rocking is and how to use it can give you some very much-needed respite from the constant knife-edge life you’re living with a Narcissist.

The term Grey Rock was apparently coined by a blogger named Skylar, in a blog entitled 'The Gray Rock Method of Dealing with Psychopaths'. I've also heard from another source that the concept was devised by the British Special Forces to protect soldiers captured during the war. Whatever the origins, the 'method' is about being as boring, uninteresting, un-reactive, and neutral as a grey rock - unless you're a Geologist, rocks are just, well, boring, aren't they?

Grey Rock is also a very useful tool if you’re in a work situation and your boss or colleague are Narcs, and in the short term, you can’t get out, or you have parents or family you can’t get out of visiting.

These situations apply to many of the people I’ve worked with, so I know there are plenty more people out there who are in similar situations.

One of the many things that Narcissists are have in spades is tenacity… the tenacity to keep on picking on you, belittling you, baiting you, trying every trick in his in-exhaustive handbook of Narcissistic tricks to get a rise out of you…

it’s mentally exhausting and when you constantly keep trying to defend yourself, argue, reason, placate and otherwise mollify them, you’re draining your own energy, giving yourself no mental peace or space to breathe….

But guess what? Applying the ‘Grey Rock’ technique can free you from all this and once you get your head round that, you’re going to be able to get some peace. Because once the Narc realizes that they can’t get that all-important fuel from you, they'll stop.  They'll stop long enough to give you that space to think and have that bit of peace that your brain is craving.

Of course that’s not to say they won’t come back at you with renewed enthusiasm, after they've given you the silent treatment, stomped around sulking, or done whatever they needed to… they will come back, guaranteed. But then, you continue grey rocking. Remember also that Narcissists and Psychopaths crave stimulation, and if you stop giving them any, you really take the wind out of their sails.

Narcissists are good at reading their victims, but they need to get inside your head to know which buttons to push. That's how they master the art of their vile abuse. If you stop reacting, arguing, crying, trying to reason with them, and give them nothing, they'll be flummoxed. They might seem like mind-readers a lot of the time, but the fact is, they're not mind-readers, they are just reading what you're giving them. And every time you try to do what normal people do to iron out the kinks in the relationship (which by the way, is an out-and-out impossibility with a Narcissist), you're giving them the information they need to hurt you more.

So what exactly is Grey Rocking when you get down to it? Quite simply, it’s being as boring and non-reactive as you possibly can. Think bland… the blandest of the bland! Think of the most boring non-conversation you could ever possibly have, and give only that to your Narc.

So here’s four quick-fire tips on how to Grey Rock like a pro!

Firstly, you must decide to clam up and keep all your real thoughts and feelings to yourself. The less the Narc knows about what’s really going on in your head, the better. Even if you are in a rage or a puddle of angst over something they’ve said or done, DON’T show it. Think ‘Poker Face!’ and don’t let your emotions show.

Don’t start conversations with them AT ALL, and don’t ask questions. Think of Grey Rocking as the ‘real life’ equivalent of No Contact – or Low Contact. You’re aiming to keep communication, and therefore opportunities to give them fuel, and yourself stress, to an absolute minimum.

If they ask you questions, make your answers as brief and bland as possible. Don’t go into any but the most basic details. Yes and No will suffice when possible. If they probe, be a creatively dull as you possibly can be.

So your Narc asks: How was work today?
Same as always
Were you busy?
Yes/No
Who did you have lunch with?
No one (even if you did, lie about that and say no one)
What did you have for lunch?
Sandwich.
What kind of sandwich?
Bread and cheese

Ok, so you get the idea… now it takes a bit of practice and internal restraint to get into the swing of this, because we’re programmed to be social and to respond when spoken to or answer questions, so we automatically start filling in the blanks and offering up information without thinking about it.

When you start dealing with a Narc, you have to learn a whole new set of coping skills.

Bear in mind that when you start doing this, your Narc is very probably going to start telling you you’re boring, idiotic, a useless conversationalist, say infantile things like:

‘What, cat got your tongue’ and other childish barbs… your job is to nod and say ‘Yeah’… with a boring sigh… like you don’t have the energy for anything more.

and they'll probably say a lot worse. Don’t take the bait and start trying to defend yourself. KEEP GREY ROCKING!

You can also just murmour ‘Mmmm’ a lot of the time!

If they keep pressing you for a response, which they very well might, say something like ‘You’re right. You’re always right.’ That will please them because it feeds into their ridiculous egos.

But in the back of your mind, you know this is an act that YOU are putting on for them.

You can practice this by thinking of all the usual kinds of questions your Narc usually asks you, or the kinds of comments he makes, and start making up responses and saying them in your head. Boring boring boring responses!

Then start gradually using them…

And one final tip, no four:

You can also buy yourself time when the Narc is asking questions that require an answer, and say things like ‘maybe’, ‘we’ll see’, or ‘possibly’, in cases where you’re being asked to commit to something you’re not sure about. Get used to using these strategies to buy yourself some thinking time and space.

Never tell them that this is something you are doing intentionally. That will completely blow your cover and render your attempts useless, but be prepared for them to notice this change in your behavior. You mind find them starting at you, or hovering around you, trying to intimidate you…

Warning… having said all that…

When you first do this, they might well react with anger and start shouting, threatening, and trying to scare you. But – and I say this with a big caveat – only do this Grey Rocking if you know your partner is NOT physically violent.

Don’t let this be an excuse that provokes his anger and causes him to start hitting you or throwing things… if that’s the case and he’s prone to violence, then for the love of God file a police report and get a restraining order…

I just wanted to make that clear because I don’t want you to do anything that will put you in physical danger – so I’m talking about grey rocking as a tactic that will work if you’ve got a non-violent narc to deal with.

So, assuming you do, let’s go back to what to expect… anger, very likely, but you have to remain cool. Let him rant and rave. He’s only trying to extract a reaction from you. If he doesn’t get it, his anger will soon die down.

Expect as I mentioned, possibly the silent treatment (and if you get that, consider it a blessing… peace perfect peace for a while… let him go and sulk in a corner like a 5 year old!), you can expect derision, sarcastic comments, cajoling, laughter… just run through all your Narc’s typical tactics, and be prepared for all of them to come to the party.

But remain calm, bland and boring in the face of all of them. If you can perfect this ‘narc neutralizing technique’, you’ll find they will back off and leave you alone, because it’s taking far too much effort for zero gain – ie, fuel, from you, and they will look elsewhere for that fuel.

Before I bring this to a close, there’s a couple of things I want to mention here and that is that whilst Grey Rock is a very handy tool to have in your arsenal against a Narcissist, remember that you don’t want to shut yourself off in this way from everyone else. It’s important that you make that clear distinction in your head. You only want to numb yourself to the Narc, not to other people who are important in your life. Grey Rock will not cause dissociation, as has sometimes been said. You are very in touch with yourself when you Grey Rock. You just CHOOSE not to engage in a meaningful way. Think of it as being deliberately closed, and keeping your cards close to your chest.

And reach out to a trusted friend, or your support group, so you can share your thoughts and feelings with them about what you are going through. Don’t bottle it all up and try to go it alone because isolation like this on top of the constant Narcissistic Abuse, is seriously detrimental to your emotional health.

Now these tips are not going to heal you completely and make your life perfect, but they will give you some peace and breathing space while you figure out what to do next. Grey Rock is not a long-term solution to healing from Narcissistic Abuse. For that to happen, you need to get out of the relationship. No matter how long it might take.

If you’ve got any experience with Grey Rocking yourself, please share your comments.