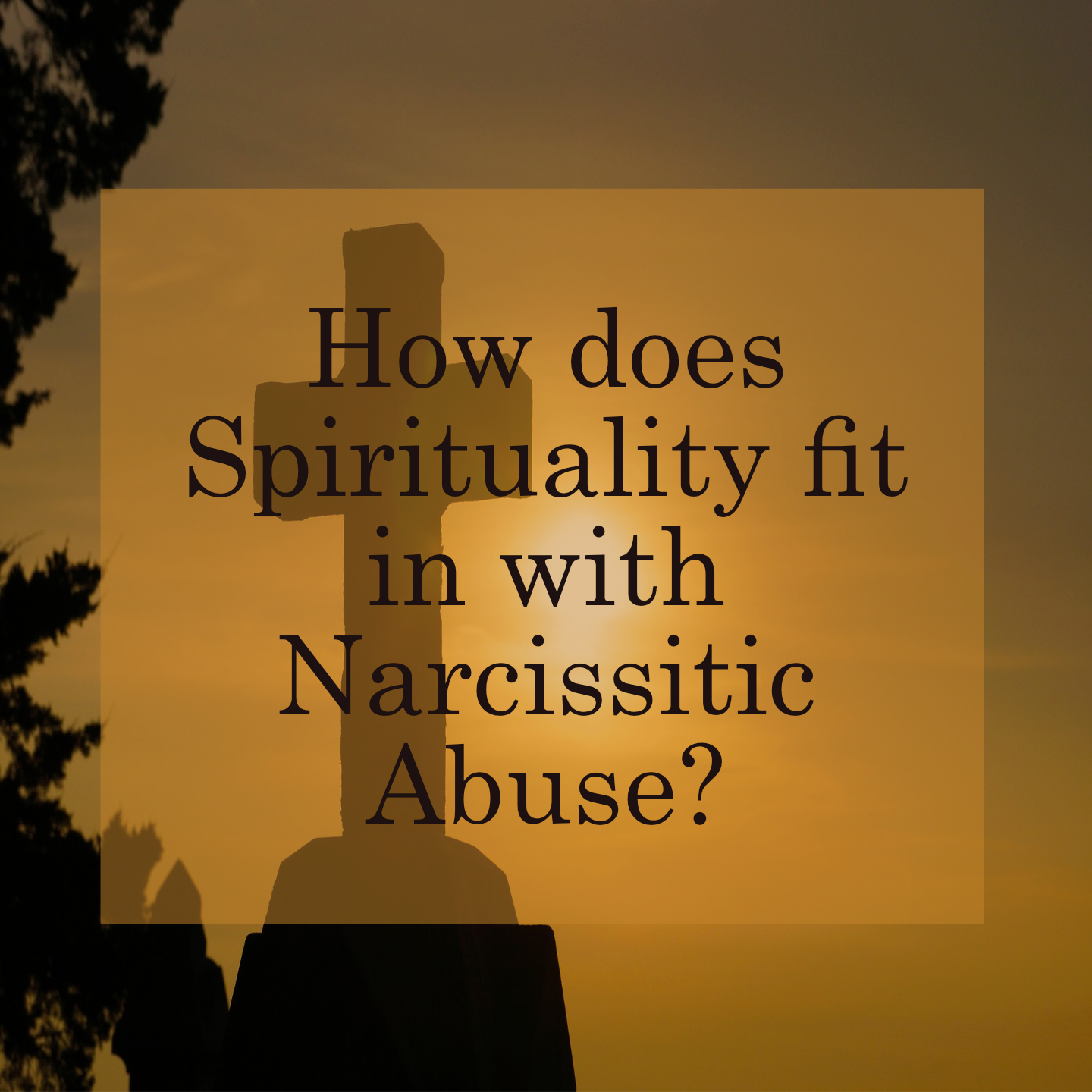 How does Spirituality fit in with Narcissistic Abuse?

The subject of spirituality and religion seems to be popping up a lot lately – not just in my group, but a lot of other places in my network, so I thought it would be a good topic to have a chat with you about today.

So firstly, let me clarify my personal position. I was raised Catholic, by Irish Parents, and all my growing up years were spent towing the Catholic line. But things about the religion often niggled me. For example, divorce is not allowed in the Catholic religion, even today. When I first learned about violent domestic abuse, it struck me as plain wrong that a woman was supposed to stay in the marriage because she’d made vows… ‘for better or for worse’…

we have an expression in Ireland that is quite inoffensive compared to its British F word counterpart – and that word is FECK. If you have Irish blood in you, you’ll probably recognize it.

And I remember thinking ‘Well FECK that! No God would want a woman (or a man for that matter - and believe me, there are 1000s of men out there being abussed too) to suffer being beaten black and blue, having her bones broken and being hospitalized! I just felt in my heart and soul that it was wrong.

And then there was the cheating… should you stay with a man who was sleeping with another woman? Wasn’t that breaking the ‘forsaking all others’ part of the wedding vows? But to Irish Catholics that I knew, it didn’t matter. Divorce was forbidden, no matter the circumstances. So to my way of thinking, if this religion allowed any man to beat or cheat on his wife with impunity… that was ok with the Church.

Well it wasn’t ok with me! I’ve always been fairly independent, and I never married anyone. I turned down two proposals because somewhere deep in my heart, I knew that I didn’t want to be tied to vows I couldn’t promise not to break if circumstances changed beyond my control – as they so often do in marriages.

And I was right in making that decision for myself. I was in a relationship with a man for 14 years, much of it unhappy, and eventually I knew I couldn't stay with him any longer. So I broke up with him - for the final time. We'd had more breakups and makeups that I care to remember, so I do understand the pull to go back into a relationship even when in your heart you know you it's wrong for you.

So in my early 30s I really began digging into alternative, spiritual beliefs that had nothing to do with religion. Somehow there had to be more to God and Spirituality than what Religion was telling me…

This led me to some amazing books that burst open the doors of my thinking differently… none of them said God didn’t exist, and I’ve never been an atheist, I’ve always believed in God, but I came to the conclusion that most religions are about power, money and control. More wars have been fought, and more people have died, in the name of religion, than anything else.

I remember well the ‘troubles’ in Ireland - where Catholics and Protestants were bombing each other to bits. Many innocent people were blown to smithereens in London during the reign of the IRA Bombings. My parents often used to talk about it, and much as my mother loved to belt out an Irish Rebel song, she didn’t agree with these senseless killings, and neither did my father.

I don’t believe God has anything to do with this whatsoever. People make religions. People create wars. God doesn’t.

So having thought long and hard about all this, I declared myself an ex-Catholic and followed the spiritual path instead.

I believed and still believe, that I didn’t need a priest, pastor or any other supposedly ‘God appointed’ official to connect me with God. I didn’t need the middle man because I knew I was already connected to God, and my years of subsequent study which continue to this day, convinced me that I’m right. So I describe myself as deeply spiritual, and not religious at all!

Now, having said that, I want to make it really clear here that I’m not knocking or criticizing religion – it can and does work wonders for millions of people, and if you find comfort in your religion then that is a wonderful thing.  Personally I love watching Christian films, like ‘God’s Not Dead’ and ‘I Can Only Imagine’…

I also believe in prayer and most of my private meditations involve God, Jesus and my Guardian Angels.

I think most people I’ve ever known believe in SOME form of Higher Power. Whether that be God, the Universe, consciousness, Nature… matters not.

What matters to them is their belief that there is some force, some power, greater than they are, who’s really running the show.

I also want to say that if you’re an atheist, that’s absolutely fine too. We all choose our path because that is where we are meant to be right now, and these choices are deeply personal and no one should ever try to convince you towards or away from any belief. You need to do your own thinking and make up your own mind, and stick with what makes sense to you and gives you a sense of inner peace.

But if you are an atheist, and I know many people who are, then you are probably aware that you have a wise, inner mind… another part of yourself that knows things that you don’t. You might call this your subconscious, and that’s a form of higher power too.

So, what does spirituality have to do with Narcissistic Abuse?

So, let’s start with your Narcissistic Relationship… you’ve learned, because of the manipulative tactics Narcissists use, to value yourself according to how they’ve treated you, what they told you were or are worth…

and by constantly devaluing, demeaning and belittling you, they’ve stripped you of your inner belief of who you are, so that you’re left feeling emotionally wracked, depressed, hopeless and your self-esteem is at its lowest ebb ever.

So basically, your Narc has become your higher power because you’ve bought into all the crap they’ve subjected you to.

So I want to share a little exercise with you today, that’s going to help you to get some clarity around this issue, and that you do as soon as you can make the time. It’s quite an eye-opener for many people when they try it.

You’ll need a journal or a writing pad of some kind for this exercise so you can make notes of what comes up for you.

So, when you sit back and think about this, ask yourself the question:

1.     Who is more powerful, my Higher Power, or my Narcissist? Really let that one sink deep down and think about it. FEEL into it.

2.     Then ask yourself: Is my Narcissist REALLY more powerful than my Higher Power?

3.     And then ask yourself ‘Am I willing to believe that my Narcissist is NOT all-powerful, after all?

When you think of these questions, just sit with them and see what comes up for you. Often, you’ll find yourself awakening from a deep sleep… as if a big light bulb has been switched on!

When you start thinking ‘No! My Narcissist is NOT my higher power… then you’re ready to start building, or rather rebuilding, your inner foundation of strength.

Then you can do a little comparative analysis. So go to a clean sheet of paper in your journal, and draw a line down the middle so you have two columns.

In the first column, write at the top: ‘My Higher Power Is… and list all the things you can think of in that column. These will be things like

‘loving, kind, forgiving, non-judgemental, trustworthy, all-knowing’, and so on. Keep going until you’ve run out of things to write.

Now turn to the second column, and at the top write: My Higher Power is NOT…

focus on your Narc now, and write down ALL the cruel, unkind, dreadful things that he is doing or has done… so examples would be…

My Higher Power is NOT… cruel, sarcastic, demeaning, belittling, cheating on me… and so on, until you’ve covered as much as you can possibly think to write. Get it ALL down on paper.

Now, just compare those two columns and reflect on them. And then ask yourself,

‘Why am I so willing to believe the LIES instead of the truth?’… and again, think about it. Why are you so willing to let these lies define you and ruin your emotional health?

And finally, when you’ve thought about it, ask yourself two more questions:

‘Am I willing to switch my allegiance to my TRUE Higher Power now?’….

And when you are, make a commitment to reach out to your Higher Power for guidance, for love, support, and help to get this person out of your life. Do this with complete faith and trust in your higher power, and never underestimate the power of prayer.

When I say prayer, I don’t necessarily mean reciting standard prayers, although this is of course perfectly fine – I often do – but to be clear, anytime you sincerely ‘talk’ to your Higher Power asking for love, help and support, that is also prayer. So do it in a way that feels really natural and comfortable for you.

And if you’re an atheist, tune into that wise inner mind, and use it in the same way.

Ok…. Now this exercise is designed to get you questioning your inner reality, and giving you a framework to begin changing the way you’ve come to believe and think about yourself.

It’s very powerful so I really recommend you do this. Keep the paper somewhere safe, and write down everything that comes up for you. Writing helps to ground your thoughts in reality and will also strengthen your resolve to get out of the relationship, or, if the case is you simply can’t leave, this exercise can help you to emotionally detach from your Narcissist and focus on getting emotional support and inner peace from your Higher Power.

And by the way, hide that journal! You don’t want any prying eyes reading it… you definitely don’t want your Narc seeing it.

All my videos and blogs (and my Facebook Groups) always aim to educate, help you find coping strategies, etc, but if you are really struggling and need help, Connect with me here. I offer a FREE 40 minute consultation and I’m happy to talk to anyone in this group to see if we’d be a fit to work together and I can help you to recover from Narcissistic Abuse.