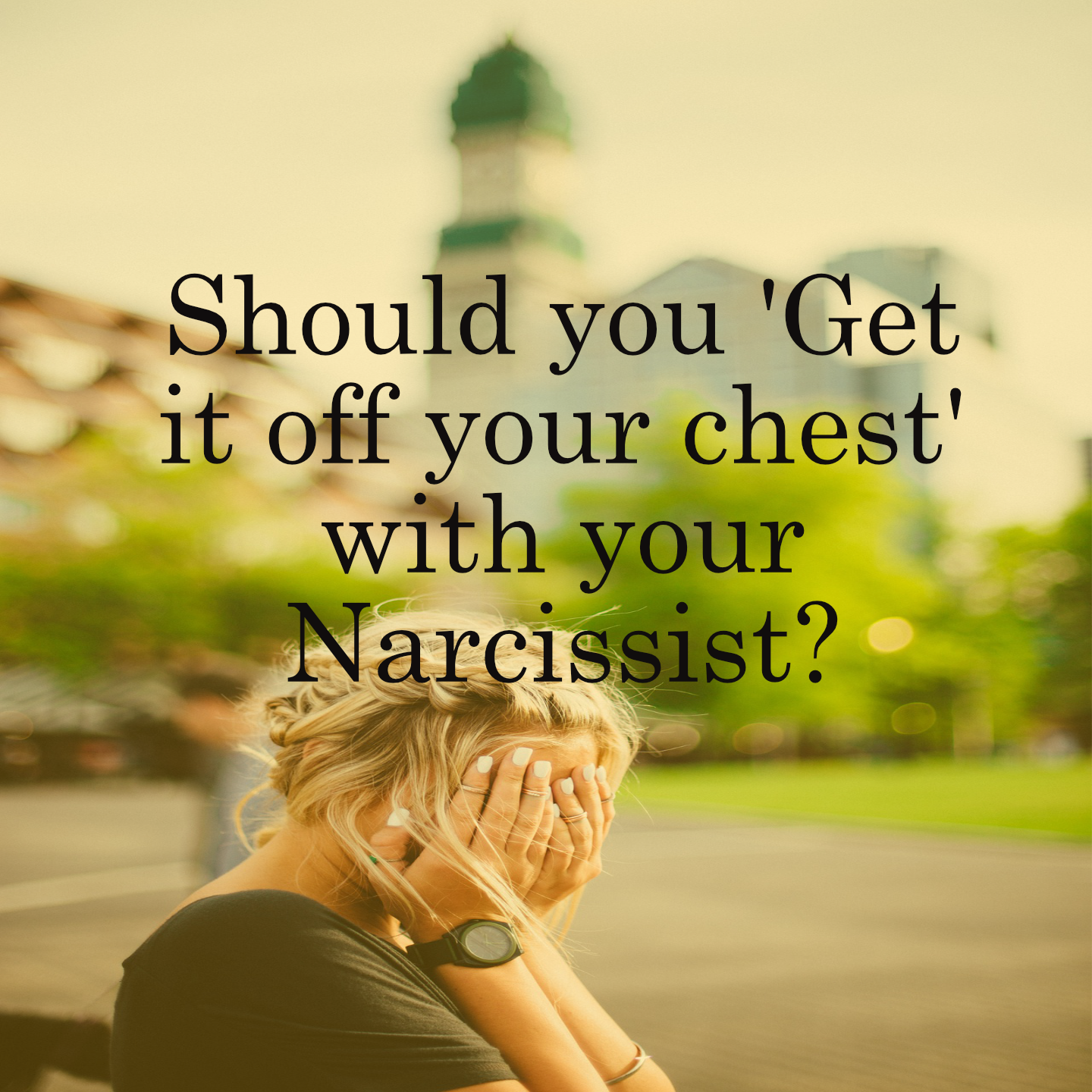 Should you 'Get it off your chest' with a Narcissist?

Answer: Yes and No!

To want to get revenge, to 'get it off your chest', or to get your own back is human nature. When we’ve been wronged and hurt, it’s our moral right to want to defend ourselves. We think that they deserve a piece of our mind, and in most normal relationships, when we’ve been cheated on or betrayed and we confront the person who’s done that to us, they are usually sorry, ashamed or whatever. Or, at the very least, you will have had the pleasure of letting them know what you really think of them now. But when it comes to the narcissist, this is not the case.

You have to understand, and remember the narc is not normal, and any attempt to give them that piece of your mind is just giving them more narcissistic supply. They don’t give a hoot about what you feel or think. They really don’t.

Telling them what you think of them, whether it’s your hurt, anger, bitterness… is all going to fall on deaf ears, because all the Narcissist will do is reflect it all back to you and blame YOU for everything.

A friend of mine was once involved in a relationship with a covert, which he'd broken off, but she kept calling him and they would spend hours, literally hours, squabbling on the phone. This was going on one time when he visited me for a holiday in Abu Dhabi when I lived there, so I got to listen unwittingly to the whole sorry saga. It was insanity. I could hear some of the things my friend was saying, with his outraged 'WHAT???' peppering the conversation every few minutes.

When he caught a break and got off the phone, I told him to just stop. No contact means no contact. By talking to her for hours on the phone, I explained, you are just feeding her what she needs. STOP! Block her number, or reject the call. And stick to that plan.

So he did, and within a matter of about half an hour, he showed me his phone and he had 36 missed calls. My friend had no idea how to deal with this narc and tried rationalising with her. I told him that he might as well howl at the moon, for all the good that would do him. I said your only recourse here is to ignore, ignore, ignore, and when you get home, change your number and only give it to people you trust, and tell them NOT to give it to anyone, under any circumstances. It still took him several weeks to get shot of her. He eventually called me and told me, and said 'Thanks for your advice. She's a f****** nutter and I've never had to deal with anyone like her!"

You need to take yourself out of their reach, and if that means changing your phone, email, or whatever, do it. At least on FB you can block people and you can block their phone no now too.Narcissists are, by design, incapable of feeling any kind of shame or embarrassment for their atrocious betrayals. So your anger and attempts to get back and them and give them a taste of their own medicine is just giving them more supply.

So when you’re chomping at the bit to lash out at them, because that will make you feel so much better…

STOP! And consider this…. Lashing out at them will give them a huge dose of narcissistic fuel, and they will feel great! This is just how their warped world is, so your attempts to inflict justice on them will have the reverse effect.

Decide that you will not give them the satisfaction, and as I’ve mentioned before, find another way to vent – punch that pillow, have a screaming hissy fit in the privacy of your own home, share your thoughts with your safe person, support group or therapist. Do whatever it takes to get it out of your system and derive as much pleasure as you can from knowing that you are denying the narc this massive dose of fuel! That is the very best form of revenge you can possibly take on a Narcissist.

However, if it’s constructive revenge, it most definitely has its place, and I don't think that narcissists can continue to get away with the abuse, fraud, theft and such serious criminal crimes that they are getting away with because they are so so cunning, manipulative and good at it.

If your Narcissist is up to illegal acts, you need to report them, go to the police, keep copies / screenshots / recordings and whatever else you can to prove their deceptive behavior.

Do this for their personal behavior to you, but also, if you know for example, that they are earning money and not declaring it, that’s tax fraud and most countries take this more seriously than murder!

Don't buy into the bullshit that they are invincible, because they are NOT, and today, I had two incredible stories from women in my group that attest to that fact.

Both of them took action and reported fraudulent behavior (tax and extorting money from women) to the police and got affirmative action in both cases. Justice CAN prevail.

However, it’s NOT always advisable if you know or suspect your Narcissist is capable of physical violence, or liable to be destructive of you in other ways… damaging your car, home and property, for example. In these cases you need to be very careful not to incite Narcissistic Rage that can lead to such violent/destructive acts. In such cases, No Contact and No Action would be safer courses of action for you. So always weigh up the options and always act with your personal safety in mind.

narcissistic abuse, Revenge on your Narcissist