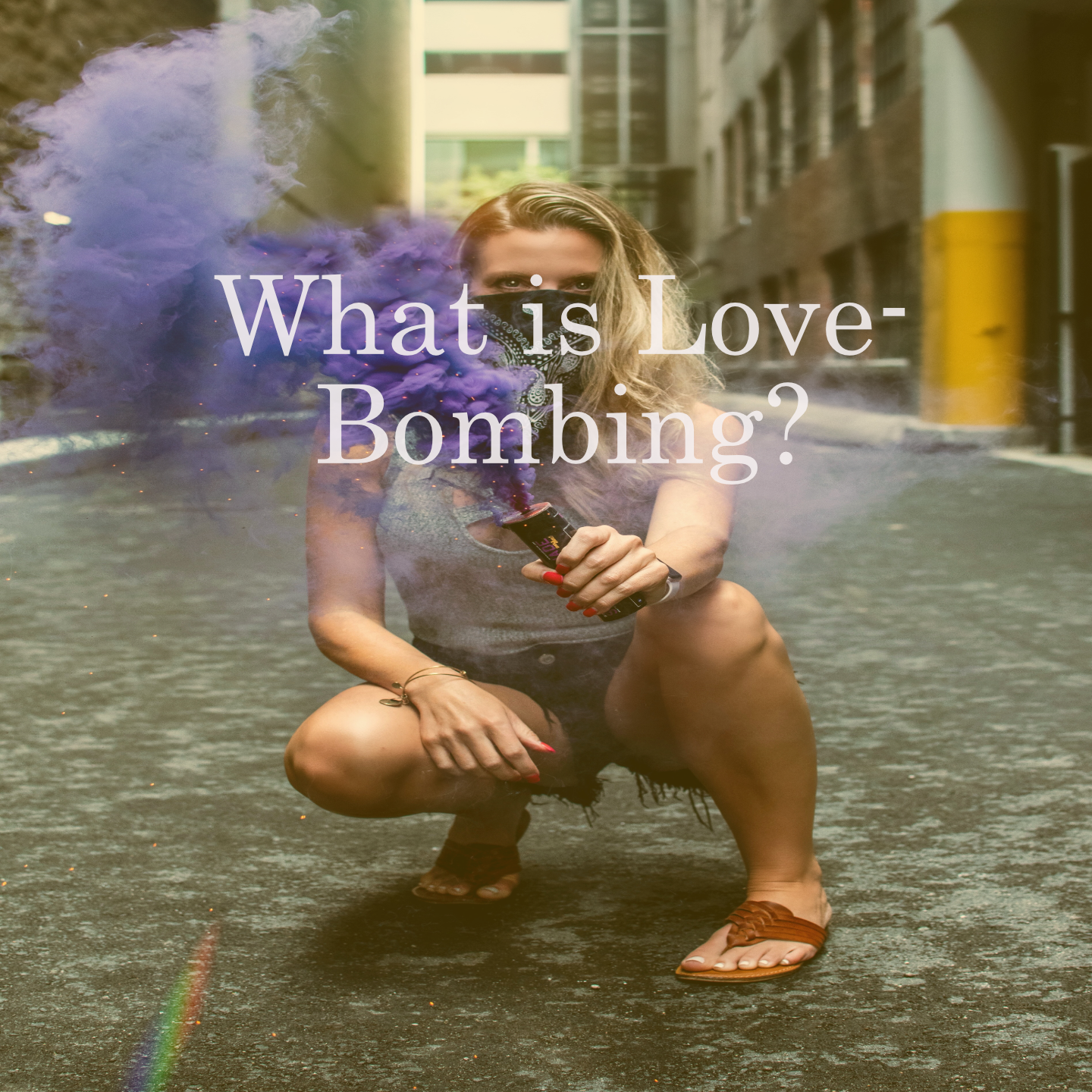 What is 'Love-Bombing' & How do you Heal from it?

Love bombing, also known as the 'idealization stage' is the first stage most narcissists use to engage, snare and capture you.  The narcissist will hone in on his (or her) target like bees round a honeypot. He (or she) will have researched you (via social media, friends, or colleagues), to find out as much as possible about you. This means that when they contact you, they know exactly what to say to get your interest. You’ll feel an immediate rapport with this person. According to various online sources, the term 'love bombing' was coined in the 1970s by members of the Unification Church of the United States, whose roots were in South Korea. The term was meant to denote genuine love and interest shown to others. I suppose, a bit like the 'free love' and 'peace' movement of the 1960s.

Once you meet a romantic predator, they will take you to lovely places, often shower you with gifts (though not all of them do that, especially if they are the stingy type) compliments galore, behave impeccably, make you feel like a king or queen, and before you know what’s hit you, you’ll be head over heels in love. You’ll share your deepest, darkest secrets with them, and feel that finally, you’ve found that special someone who truly understands you. You'll be walking on water, up on cloud nine, and all that euphoric stuff. You’ll be drowning in your own dopamine bath and it’ll feel amazing.

And what will be more amazing still is that this magical person feels the same way about you, and in a very short time, they'll be telling you that they love you... and here’s a huge red flag for you – it’s WAY TOO SOON to be telling you that they are in love with you, that you're the best thing since sliced bread, but they'll tell you that they'e never met anyone like you, that you are their soul mate, that you were destined to be together… and deep down inside, there is a little warning bell ringing, but you ignore it because the feelings of joy you’re experiencing now are just too good to ignore. You are desperate for them, and having possibly been deprived of real love for so long, you can’t be blamed for grabbing this chance with both hands. Who wouldn't? It's so intoxicating!

At this stage of love bombing, there’s an incredibly potent chemical hormonal mix going on inside you and you are powerless to fight it. But actually, you’re not. If you only knew what to look out for, you’d keep your guard up and do your homework before going all-in with the relationship. So many people I’ve talked to said that they heard the warning bell, but they didn’t listen to it. It was there, nudging annoyingly in the deepest recesses of their minds, but they pushed it away.

You know that old saying "If it's too good to be true, it probably is'? Well in the case of narcissistic love-bombing, it is ALWAYS too good to be true, and you are, unfortunately, going to pay very dearly down the line if you don't listen to your instincts. The most powerful thing you can do to protect yourself from narcissists getting their grips into you is actually very simple. TRUST YOUR GUT! It's my red flag No 1 in my book for a reason. If something doesn’t feel right, pay attention to that feeling. Scope the relationship out and learn more about this person. There are a TON of red flags to watch out for in the early stages of the relationship. Pay attention to every single one of them. And trust your instincts!

If you don't, soon enough, the love-bombing will stop and the 'discard' will start, and that's when your 'knight in shining armour', or this 'goddess' of a woman (I've had people describe them exactly in these terms) turns into the nightmare demon from hell, and you're going to suffer heartbreak like you've never known. That will then be followed by the 'discard' when they dump you because they've found a new, more exciting line of fuel. You'll be left in emotional shreds, and it's a horrible place to be. You'll be left licking your wounds, wondering what the hell you did wrong, and going out of your mind with the stress of it all. At this point, you need to start learning all about Narcissistic Personality Disorder, and the abuse that's part of the territory of falling for a narcissist. You need to know it's not your fault, you did nothing wrong, and most importantly, you need to start believing that you can heal, because you can.

If you're still in love with this person when they discard you, life is going to be hell, because you're very likely trauma bonded, so you're desperately, aching to be back with this person, even though you know that being with them is toxic and they have already tried to destroy you, and left you a shadow of your former self. You don't understand what's going on inside you. How can you want them back when they caused you so much pain? WTF is wrong with you? You'll be asking yourself this, and many more questions. Trauma bonding creates a dependency in you that the narcissist created, and they know just how to do that. They've manipulated you into a position of loving them, becoming dependent on them, and then they've tossed you aside, gone off with their next 'target' and they flaunt this in your face, leaving you feeling wretched, depressed, worthless and often suffering with Complex-PTSD.

Why do narcissists love bomb you?

Narcissists have no sense of self, and part of having NPD is that they crave attention, adoration and being the centre of attention. They want to captivate and capture your heart as soon as possible, so that they can ultimately control you. They shower you with love and affection and know that you will fall under their spell, thus showering them with love and attention in return. They feed off this attention. But it goes much deeper than that. When I’ve tried to explain to people that when you fall in love with a narcissist, and you are being ‘mirrored’, you are really seeing all the good in yourself. This is exactly what the narcissist wants. As the prolific author and blogger, HG Tudor, (who describes himself as a ‘narcissistic sociopath’ or a ‘Greater Elite Narcissist’ according to his in-depth definitions of the various type of narcissists that exist – definitions which can’t be found elsewhere)  says in one of his posts:

Towards the end, he says:

“So, there you sit, my crosshairs trained on you, the target on your heart all lit up and easy to see to one such as I. It is time to commence the seduction, time to love bomb you. Time to make you mine with the application of falsification, fakery and fabrication on an unprecedented scale.”

“I am like the predator that has learned to mimic the firefly. I will flash and signal so you think I am ready to mate with and when you come flying to me, all eager and enraptured, I will ensnare you and later devour you as you offer no resistance, confused and dumbstruck as to how you fell for this.”

There’s no doubt about it, that’s chilling stuff. If you’d like to read the full post and start to understand the deep level of cynicism and evil that narcissists are capable of, I’ll share the link at the end of this post. I also warn against reading it if you are very early on in your journey because Tudor’s work can be very triggering.

But coming back to falling in love with yourself – it’s not about vanity or narcissism. It’s about the good parts of you showing up and being appreciated in the love-bombing stages. What I want people to know is that you ARE those good parts, and the narcissist systematically sets out to destroy everything good and wonderful about you, because you represent something they can never be. When I work with clients, one of the cornerstones of my ‘No B.S. Healing Method’ is to help them quickly recover their sense of self-worth, and make them realise that for a while, they gave themselves up, they lost themselves, and they allowed someone else to define their value. Whenever you do this, you lose your personal power. But you can take it back with the realisation that the narcissist is sick, vile, and that you are so much better in every way.

If you are struggling to recover from narcissistic abuse, be it trauma bonding, depression, C-PTSD or whatever the fallout, please click here to see how I can help you to recover, in weeks, not years.