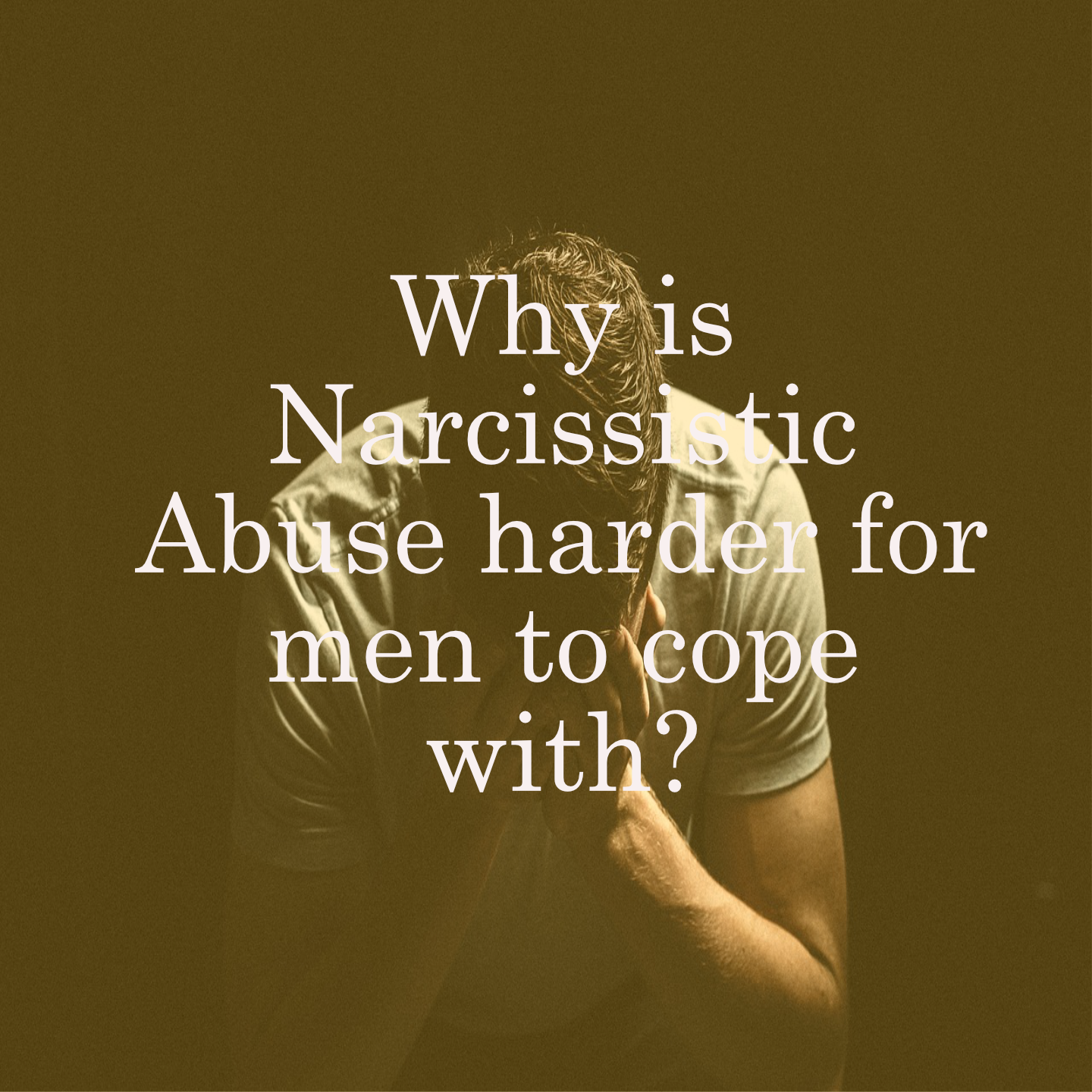 Why is Narcissistic Abuse Harder for men to cope with? 5 Reasons you can't ignore

Do men suffer with narcissistic abuse? And why is it HARDER for men to cope with the abuse?

Narcissistic abuse is impossibly hard on anyone, but it’s doubly so for a man caught in the trap. Why? There are several reasons. One is because typically women garner sympathy much more easily than men. Historically, women were thought of as the ‘weaker sex’ and of course, most are physically weaker than men. Society is not used to seeing women as the abuser and unfortunately, perpetuates the myth that only men abuse. But the truth is, women can be a lot more cunning, manipulative and vile than any man could ever be. They can switch roles from being utterly hateful, to a tearful, upset, victim in the blink of an eye, and nobody but their victim really knows the truth. Here are 4 reasons why it’s much harder for men to cope with the abuse:

They lie skillfully and make themselves look hard-done by. They’ll twist everything you say or do to make it look like you’re the villain, and everyone will fall for it because they are so damned good at it. You’re left reeling, knowing they’ve lied, but you can’t prove it. The web of lies they spin leaves you feeling like you're going out of your mind. And that's exactly how they want you to feel. They enjoy their power over you.

Another reason is that men are supposed to be tough, so it’s both difficult and incredibly demeaning to your self-esteem to have to admit that you are being emotionally and psychologically abused by a woman. This in turn adds to the sense of isolation you feel because you can’t tell anyone, for fear of looking like a complete fool. Often there is just no one you can confide in. There is this notion that abused men must be weak, wussies! But the fact is, psychological abuse is extremely complex and has nothing to do with physical strength. Most of the men I know who have been in narcissistic relationships simply would never hit a woman because it is against their personal ethics. And narcissists KNOW this, so they will push and push and push, hoping to get a rise out of you.

Another reason is that narcissists (of both sexes) typically seek out ‘victims’ who they know they can manipulate. Narcissists are known to target empaths, highly sensitive and vulnerable people. A female narcissist is always on the lookout for  all-round nice guys. You’re the kind of guy any normal woman would love to have in her life, because you have a great capacity for love, and your kind. But unfortunately, your kind, giving heart very quickly becomes a stomping ground for a hateful, mentally ill narcissistic partner.

And yet another reason is that shame begets shame, and rather than stand up to their partner when she is abusive or unreasonable in public, you’ll more than likely try to defend her, saying things like ‘She had a terrible childhood’ or ‘Her ex was really awful to her’, or any other excuse that helps you to gloss over what’s really going on. Because it’s simply too shameful and painfully embarrassing for you to admit the truth – that you are being manipulated and abused by your partner. You’ll even deny the truth to yourself, a lot of the time.

I've lost count of the times I've heard that every time the guy says he's had enough, and he really has, he breaks up, but within a matter of days, or even just hours, the ex is back texting or calling like crazy, declaring how much she loves you, can't live without you, can't stop thinking about you, yada yada... and you fall for it. Not just once. Time and time again. She's so good at convincing you that she will try to change (while passively-aggressively pointing out all your faults and blaming you, which in turn makes you start believing that you could have / should have done better), that you believe her. And you go back. But every time you do, the abuse gets worse. It’s like you are caught in a never-ending nightmare.

Female narcissists will use sex as a powerful tool to ensnare you, then they will deprive you, or sexually gaslight you (more on that in another post) which leads to confusion and feelings of rejection. They will frequently say you’re lousy in bed, you’re not a ‘real’ man, and other cruel things designed to belittle and degrade you. The Female Narcissist is not comfortable AT ALL with intimacy, but she's fantastic at PRETENDING GOOD SEX in the love bombing stage. She'll give you the best sex of your life and it'll blow your mind. This in an incredibly powerful weapon because great sex makes you feel great. Your emotions and 'love chemicals' are firing on all cylinders, and you're thinking, how did it go from being mind-blowing to a battlefield? The brutal truth is, it was all an act that she put on to make you feel that way about her. It's a potent weapon that leaves you powerless in its wake. You’re left high and dry, and as this goes on, it affects your libido and performance. It can often lead to sexual anxiety in future relationships.

What does female abuse of men really look like?

Most people don’t realise that women are capable of incredible physical violence against men, and of using scissors, knives and various heavy objects to attack them with. Some of the worst cases have been reported in the media and women have been imprisoned for their crimes. A case in point is that of Briton Alex Skeel, whose girlfriend Jordan Worth subjected him to 9 months of physical violence, including pouring boiling water on him, stabbing him with kitchen knives, punching him, breaking his teeth, and depriving him of food, to the degree that he lost 70lbs. When neighbours called the police, he would lie to cover for her because he was terrified of her. Eventually she was arrested, tried and became the first woman to be imprisoned in the UK for coercive control.

She showed all the signs of having Narcissistic Personality Disorder. Though I’ve not been able to find any reports on a diagnosis, I would bet my bottom dollar that she is a covert malignant narcissist. As is often the case with such people, she tried playing the victim – appearing to police as very delicate, soft-spoken and, were it not for his horrific injuries and his condition being so bad (doctors said he was 10 days from death at the time of her arrest), she might well have been believed. Alex bravely went public with his story in a BBC documentary entitled ‘Abused by my Girlfriend’ and he subsequently received widespread media coverage.

However, physical abuse does not exist in isolation; emotional, psychological, sexual, financial and even spiritual abuse, will also be present. Alex’s girlfriend (with whom he had two children), isolated him from his family and friends, banned him from her bed, controlled every aspect of his life, down to the clothes he wore, and subjected him to constant emotional and psychological abuse. This form of abuse is now recognised as coercive control, in the UK, Ireland and France. I believe other countries will follow suit as more cases showing the nature of coercive abuse come to light.

According to an article by The National Centre for Domestic Violence, (UK),* ‘Domestic Violence Against Men’, men are as likely to be in a coercive or controlling relationship as women:

‘Related to the issue of domestic violence against men is coercive control. A survey of 2,003 adults in late-2018 by West London solicitors IBB found an equal portion of men and women (34%) saying they had experienced being in a coercive or controlling relationship.

Yet 48% of men who responded said they did nothing about it, compared with 33% of the women.’

*see link at the end of the article

In the absence of physical violence, sustained psychological abuse is just as deadly. It has driven people to the brink of suicide, and in many cases, tragically, to actual suicide. It is not to be taken lightly. I have a private Facebook group with over 3,000 members – all men. I have heard so many horror stories of the damage the female narcissists have done to them. There are also many gay members in the group; narcissists, as I have mentioned before, can be found in all walks of life, regardless of race, creed, colour, culture, gender, or sexual orientation.

So what do you  do? How do you get out of this nightmare of a relationship?

If you are in such a relationship now, it’s time to wake up to the realisation that your mental health is at risk, and it will get steadily worse if you don’t do something about it. Your only hope for happiness lies in getting out of the relationship, going no contact (or low contact if you have kids together) and severing the emotional ties and trauma bonds that are keeping you stuck in the relationship. If you have to divorce, then you need to find a lawyer who understands NPD (Narcissistic Personality Disorder), or at the very least, one who has experience in domestic violence. If you don’t find one such lawyer, you run the risk of having your narcissistic partner totally hoodwink the lawyer you do choose. It happens all the time.

If you have trusted family members or friends, talk to them if you can. If not, then I’d recommend you join a support group (see the link to my FB group at the end). Connecting with other guys who really understand what you are going through can be incredibly helpful and healing.

Learn as much as you can about Narcissistic Personality Disorder, so that you know what you are really dealing with. Knowledge is power.

Get a therapist who specialises in narcissistic abuse and recovery. Talk to me!

If you are out of the relationship but still struggling to make sense of it all, and you just don’t know how to move on, then find a therapist to work with, one who can help you understand the abuse, why you attracted a narcissist, why you 'allowed' it to continue, and how you can release the pain, heal your heart, and be happy again. And believe me, you can. These days I work with more men than women, to help them make sense of what’s happened to them, and heal in a matter of weeks, not years. Book an appointment with me.

If you’re a guy and you want to connect with other guys who will understand what you are going through, come join my private, men only Facebook group here.