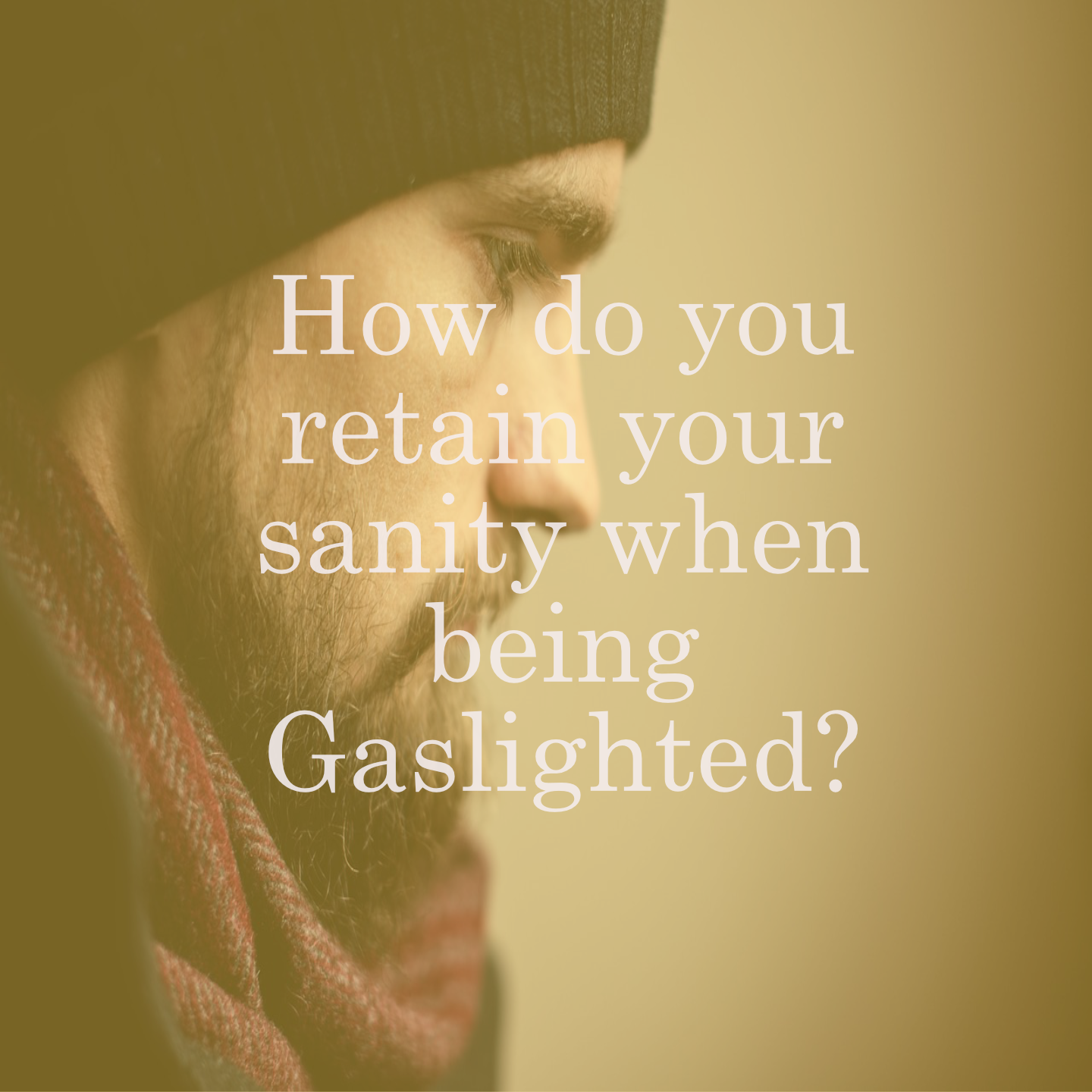 How do you retain your sanity when being 'Gaslighted'?

Gaslighting is an emotional abuse tactic used by narcissists who manipulate you into questioning your own perceptions. They’re adept at making you doubt your own reality.

The term originates from a 1938 play by British dramatist Patrick Hamilton. Two films were subsequently made, in 1940 and 1944, further popularizing the term. In the story, the manipulative husband keeps doing things to make his wife doubt her sanity. For example, he keeps hiding special items of hers, then telling her she's to blame for losing them. She begins to think she's losing her mind, and having no clue that he's the cause, she relies on him even more, and begins to really believe that she is mentally unwell. This is all part of the Narcissist's strategy. The gas lighting in the house keeps dimming, and she hears knocking on the walls. When she tells him, he says she's imagining it. But of course, he's responsible for both things happening, and she becomes more anxious and emotionally fragile as time goes on.

So anyway, gas  lighting in today’s world of narcissism is basically the same… the Narcissist will keep doing and saying things to make you question your reality, refuse to admit they could possibly have got it wrong, and they are so convincing, you start really wondering if you're going out of your mind and, they are incredibly tenacious in their application of this tactic. They can keep this up endlessly, for years, if need be. They won't give up and they won't give in. So you'll cave first, because nobody but a Narcissist has the tenacity to keep this up. It would exhaust a normal person. And that’s what it does in a way too, it emotionally exhausts and weakens you.

The scary thing about gas lighting is that it’s very insidious and can take many forms.

So for example, even if you catch them in the act of removing your things, or whatever, they are so good at lying and thinking on their feet, they'll twist the reality in front of your eyes and make it something else entirely. You've imagined it. You've got it wrong. You're definitely losing your mind because that's not what they are doing at all. What is WRONG with you?  They will lie to you - with a straight face – and even though you know it’s a lie, it throws your mind into confusion because it makes no sense. When you try to call them out on it, they’ll dance around it, change the subject, give you the silent treatment, walk out of the room or the house, sulk, tell you you’ve got it wrong… anything but admit that….

well yeah, it was a lie. Narcissists don’t do admissions of guilt, mistakes or wrong doing. EVER.

Another thing they’ll do is deny they said or did something, even though you have concrete proof. They’re so convincing in their denial that you start wondering if you could be wrong. Deep down you know you’re not, but because this kind of behaviour makes no sense, or because you’ve been subjected to it as a child and consider it ‘normal’, you let it pass. You can even catch your Narc red-handed, or inflagrante in bed with someone else, and they will twist it around and make you believe that it's YOUR fault that this has happened. They have even been known to say, absurdly, 'It's not what it looks like!'. The hell it isn't!

There’s no point in arguing with a narcissist anyway, and you know it, because you can’t win an argument. They’ll start word-weaving or word-salad-ing to run circles around you and you often end up not knowing what the point of the conversation was in the first place.

This is further complicated when the Narc throws in positive reinforcement during such encounters. They might pick some random compliment out of the blue, which can do any or all of three things…

1) flatters you and reminds you of the good times, and the reason why you love them

2) it reinforces your belief that of course s/he still loves you and...

3) it throws you completely off the scent of where you were.

The more they do this, the more you become emotionally unhinged. If you’re still at the stage of being in love with your Narc, a huge part of you is desperate for them to be right… so you’ve got this additional conflict going on deep inside. You know they’re wrong, but you don’t want them to be.

You may even think that they ARE unbalanced and possibly mentally unstable, but because you’re in love with them, that caring part of you comes to the fore… you start believing they can’t help it, they don’t mean it deep down… you tell yourself they really DO love you.

Or, being the kind, caring, empathetic person that you are, your nurturing spirit kicks in and you think….

you think that you can fix them. Your love for them is strong enough to overcome any obstacle, and you really believe this.

When you get to this point… of making excuses for them, or thinking you can fix them, you’re on very dangerous ground indeed, because the simple truth is, you can’t fix them. They don’t want to be fixed, and as far as they are concerned, they’re not broken.

Another thing they’ll do is project… they’ll insist that you’re doing all sorts of crazy things… when it’s them doing it. So for example, if they’re constantly flirting in front of you, they’ll accuse you of flirting, or cheating, with every man/woman you meet… even the overweight, ageing, delivery-man when you have to sign for a package at your door or the spotty-faced teenager who delivers your pizza.

Denying it is useless. They’ll twist your denial into something else. They’ll say you’re denying it to hide your guilt! You just can’t win. The real damage this causes is that you start to withdraw from people – you don’t want to interact with anyone lest s/he accuse you again, and this is the start of social isolation – another of the Narc’s strategies to control you.

All of this can soon have you lying to yourself, second-guessing yourself,… and you’ll often start lying to others to cover up what’s really going on, you’ll keep asking yourself if you’re too sensitive or reading into things too much – a 100 times as day. It’s all part of the pattern and the Narc knows it. They are systematically eroding your personality and breaking you down.

Another thing they’ll do is tell you that everyone ELSE is a liar, and they’ll tell you lies that they’ve made up – saying this is what your family member or friend really thinks about you. You’ll feel deeply hurt, confused, and wonder could it possibly be true?

If you try saying that you’re going to confront whoever it was who’s supposed to have said this, the Narc will use more lies to cover up the possible outcomes of what might happen… for example, they’ll say ‘Of course your mum isn’t going to ADMIT she said that! Are you stupid?’ Or, ‘Do you really want to embarrass your mother by bringing that up?’ or, if you’ve gone as far as to get the denial about the lie from your mum, and you tell the Narc this, he’ll say something like ‘Well of course she would say that – to YOU’….

All of these tactics, used skillfully, and repeatedly, will seriously undermine your sense of self.

These are not all the techniques, by any means, but I’ve covered a few to  give you an idea about what to look for if you’re not sure if you’re being gas-lighted. Also look out for being trivialized, not being listened to, ignored, having things you’ve said or done ‘forgotten’, and generally anything that leaves you feeling rejected, unimportant and worthless.

So if you ARE being gas-lighted, then what do you do about it? How do you protect yourself from this and retain your sanity?

My most important advice in this is to ground yourself in reality. You KNOW you’re not stupid, you know you’re not losing your mind. Trust your gut! You owe it to yourself to stand firm in your belief in yourself.

Next is to keep a log – and keep it in a safe place, password protected so that your Narc can never access it – if you’d prefer to have a physical record, like a journal or notebook, think long and hard about where you can hide it and how accessible it will be to safely write in it. Your work desk or somewhere the Narc can’t possibly access it might be best, but if that’s not possible (maybe you work from home, or don’t work at all), then you have to get creative about where to hide it! If your Narc is aware of it, they'll get their hands on it, read it and use it to belittle you further. Possibly (or probably!) they'll even destroy it.

Then jot down what’s going on. Add dates, times, duration, what was said, and any other facts that emerge. Just writing about it as soon as possible after the event will help you to stay grounded, and know that you’re not nuts. This ‘dossier’ may also come in very handy for you down the road when you do break free and want to remind yourself of the nightmare relationship you’ve escaped… this is especially useful for you when hoovering starts. It may even come in handy if you have to go to the police, or you have to share some home-truths with family or friends.

Reach out to someone you can truly trust, or find a support group (I have two groups, one for men and one for women - see my 'Connect with me' page) and get the help you need. Know that you are not alone and you will get through this.

I’ve said it before, and I’ll say it again. Formulate an exit strategy and get out of the relationship, if you possibly can. I do know there are situations where it’s not possible, and these usually involve children, but ultimately, you goal must be to free yourself from the relationship.

Cut loose, go no contact, and start rebuilding your life from the inside out, because you are worth it.

As ever, when you know your own worth and value, it becomes much more difficult for anyone to hoodwink you. Step up for yourself. You deserve better than to be belittled, invalidated and made t feel worthless.