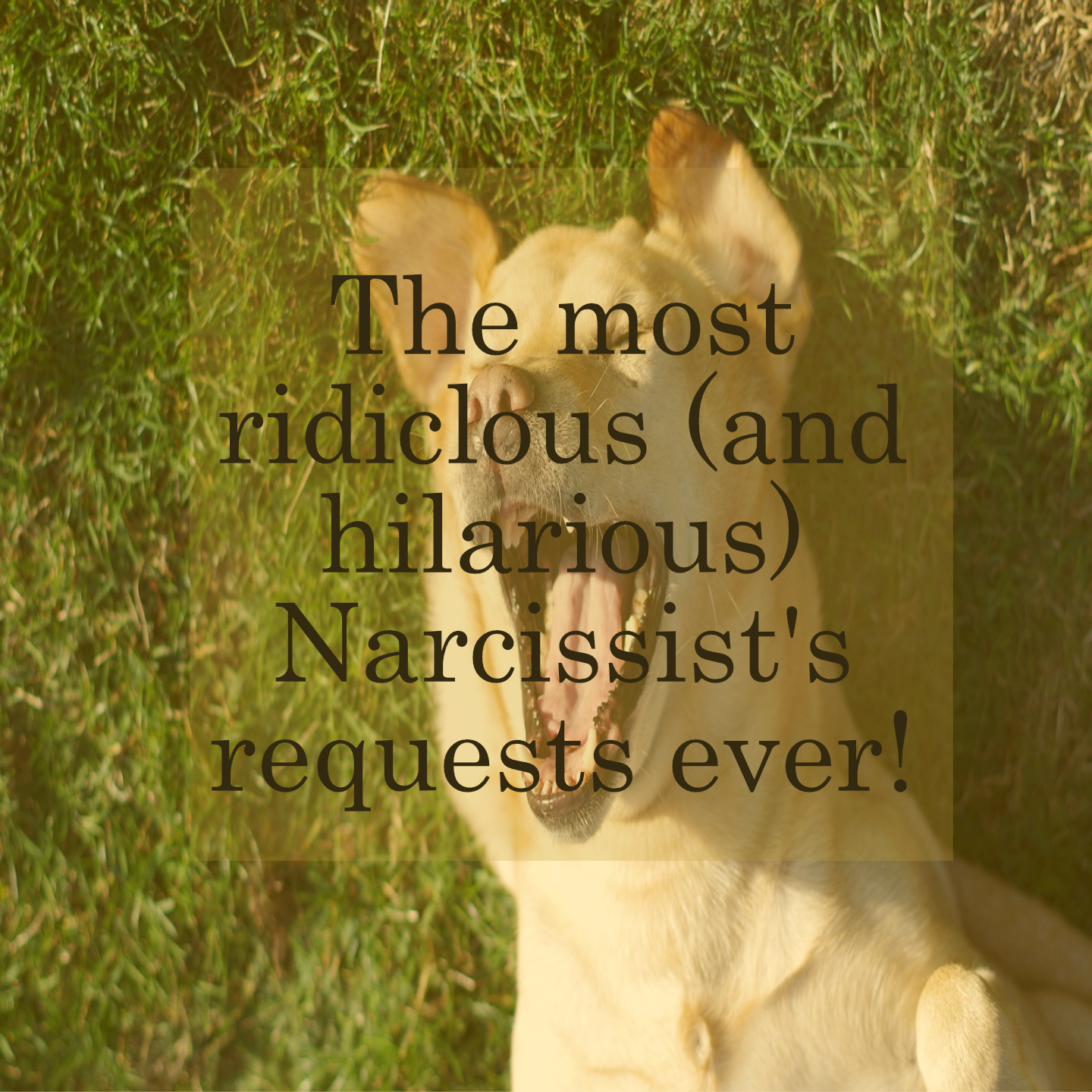 The Most Ridiculous (and hilarious) requests ever from Narcissists

"Stop giving my dog orders! He doesn't take orders from anyone but me!" To which I replied, "That's funny, he and I've been playing around with all the tricks he knows how to do upon MY command!" (This, incidentally, was the initial meeting between me and my now ex-sociopath husband. THE CHALLENGE TO ME WAS ON! THE GAUNTLET HAD BEEN TOSSED RIGHT TO ME)!!!!!!!

Maria says: There is no logic to the way a Narcissist thinks. They have a completely warped worldview, to the point that even your talking to their dog can seem like a threat. They want complete control and will challenge you if they think you’re over-stepping their ridiculous lines.

“I heard more "snide remarks" and off the wall questions...i.e. "If you like gifts you must be a gold digger" and "Are you a hustler?" My job wasn't "good enough" and I dressed like a whore. Oh, and I was "too difficult." That was my favorite.”

Maria says: Narcissists like to pick faults with you so that they can feel better about themselves. They will turn everything you say and do into an accusation or criticism of some sort. You are never good enough in their eyes. But you must realize that they are looking at the world through a very nasty, foggy lens and you need to high-tail it out of the relationship as fast as you can. Because you ARE good enough, and you deserve better than this crap.

“I asked my husband to please go to counseling. He initially refused but finally said yes. He told me the only reason why he said yes was because he wanted to find which one of us was the crazy one. Well he sure found out his answer all right  - it was him! He was pissed but I felt damn good that day and was laughing my ass off.”

Maria says: this woman was lucky to find a counselor who saw through the Narcissist’s BS. Many therapists don’t, as in the case of one woman in my group whose husband had been going to a therapist, and she decided to accompany him one day. Upon sitting down, the therapist looked at her and said ‘Are you here to sabotage your husband’s progress?’ WTF??? My advice is to never try to get your Narc to a therapist. They will learn all the jargon and come out wiser, with more ammunition to use against you. Get yourself a therapist who knows the ins and outs of Narcissistic Abuse and the emotional havoc it creates. Build the inner strength and courage to leave, and get your self-worth back.

“My husband got very angry at me and he told me to stop making him look like an ass in front of everyone. I looked at him started hysterically laughing and told him that I found that to be very funny because you do that very well on your own and I don't have to do anything.”

Maria says: it was brave of this woman to stand up to her husband like this. Very often insults result in ‘Narcissistic Injury’ and can lead to ‘Narcissistic Rage’. Never confront a Narcissist if you fear they are capable of physical violence against you. The best tactic is ‘Grey Rocking’ or ‘No Reaction’. I’ll be doing a separate article about that.

“He told me once that I was to "obey" and I started laughing hysterically and then realized he wasn't joking. I was still laughing...he was ticked.”

Maria says: Yes, fall on your feet and worship at the shrine of my magnificence. Absurd as that command to ‘obey’ sounds, this is what a Narcissist believes is their right. You have to bow down, obey, placate, praise and adore them, not matter what manner of appalling behavior they subject YOU to. Nothing they do is ever wrong. GTFO of there!

I didn’t want to take a shower!

“It was summer and a very hot day. He asked me "do I smell?" To which I answered "Yes, you do". He stormed off angrily, got a towel and on his way to the shower says angrily "I didn’t want to take a shower" (said in the voice of a little boy! If I laughed at mine, I took the chance that I would experience violence. I laughed when he couldn’t see or hear me).”

Maria says: As I’ve just pointed out, never expose yourself to violence. Find somewhere safe, away from your Narcissist, to vent, cry, rage or laugh. Don’t keep it inside as it will just fester. And plan your exit strategy!

You’re not a real woman!

“When he would start with all the insults and some would wound deeply, but he’d always say at the end “You’re not a real women you wouldn’t make a patch for a real women’s knickers.’ I don’t know why but this one always made me laugh, and sometimes out loud, which obviously didn’t go down well.’

Maria says: More and more absurd! Who’d think up something like that? Narcissists will try whatever they can to demean and belittle you because they want you to feel small, worthless and vulnerable. They more they succeed, the more powerful the Narcissist feels in themselves. Try as much as possible to see the absolute absurdity of their behavior and what they say. When you can see that clearly, you’ll start to realize that getting out is a much more attractive option for you.

Take the wind out of their sails

“I'll say this again. One of the best responses to anyone who is pulling you down or saying anything bad to you is, "Oh Really?", or "Is that a fact!", with no more said. It sort of takes the wind out of their sails because you haven't reacted, just got it, and tossed it in the air.”

Maria says: Ah yes, this is a clever way of reacting. You’re not saying they are wrong, nor that they are right. You’re basically giving them no more fuel or ammunition here to fight back with. Agreeing with them is also a good strategy, no matter what they say. Even if it’s totally demeaning, such as ‘You’re just a whore’, you just say, ‘Yeah, ok’. What can they come back with? Whatever they come back with, you agree with them. And doing that will take the wind out of their sails because they can’t get a rise out of you.

“Here's another one.. shopping in a grocery store, I picked up some eggs. He got angry and had a meltdown in public. Saying loudly, why are you buying that, we don’t eat eggs (not true). I'm wasting money, I should put them back. He didn’t know that people were watching him and laughing, looked at me and then I laughed.”

Maria says: To a Narcissist, the truth is of little importance. They will say black is white and Monday is Tuesday. They are addicted to causing conflict, and telling the truth is just too ‘normal’ for them. So they’ll lie barefacedly just to watch you get into a flap.

“Oh!!! Yes when you go to bed then you wake up next day & your cushions are clearly missing off the chair & you don't say a word, just go on like pretending you haven't noticed...like many other obvious things...pieces were magically disappearing. I just kept quiet...he would say ‘You're so dumb’ ...but I couldn't be bothered ...it was easier to say nothing at all...that got him more than me losing my accessories... Then some things would be at his sisters ...funny how an 80s gum ball machine sitting on my bar goes missing but got to her house ...its sitting there...lol.”

Maria says: This is gaslighting. This woman’s Narcissist was hoping she would say ‘Where are my cushions’ and he would then deny any knowledge of having taken or moved them, and would tell her that she never had any cushions, or that she must have moved them herself. Even when you catch a Narcissist red-handed in the act, they will still deny it and ‘word salad’ their way out of it, and it will always, always, be your fault. This woman didn’t take the bait, and thus robbed her Narcissist of fuel. However, it’s not acceptable to have your valued possessions stolen from you. Is it?

You just want my money!

“I was accused of taking advantage of the evil narc troll for his money. What money??? He was broke, had no car, all his clothes had paint on them, and he was evicted for not paying rent when I first met him, making him homeless. Meanwhile, it was him who was taking advantage of what little money I had! In the 6 months we were together, with my encouragement and my seed money, he was able to start his own painting business, purchase a work van, buy tools, and move into a nice rental home. Meanwhile, he would brag about how successful his new business was, and yet he never paid me a dime back of the money he "borrowed." It was ridiculous!!!”

Maria says: This is a perfect example of the Narcissist’s mind in action. They completely deny the reality of what is happening and ‘project’ their warped ideas onto you. That is, they accuse you of doing exactly what they are doing. It is ridiculous, infuriating and wrong. If this is going on in your relationship, you need to step back and take a long hard look at YOUR reality. Deep down, you know it’s all wrong, and you need to make the decision to put a stop to it.

“ I broke up with a boyfriend so he hacked into my FB and posted as me saying that I use men for money and I am a prostitute and the most selfish person alive. Every one of my friends knew that he hacked me and a few of them commented ‘Great job!’ I think this was the funniest story I could remember.”

Maria says: I had to admire this woman for having the courage to leave her boyfriend, and then to see the funny side of what he did. But it’s really NOT funny. Hacking someone’s FB account is something they will do if they can, so when you break up, you need to go totally No Contact and secure your FB and other Social Media accounts. Change all your passwords, and block anyone in your circle who knows your ex. This slander is part of the ‘Smear’ Campaigns that many Narcissists start as a way to continue hurting and abusing you and it’s very likely to occur if you ‘Discard’ them. Be warned.